Part of the message is hidden for the guests. Please log in or register to see it.
EURO CUP AND WORLD CUP COLLECTION 1930-2022

SWOS uses a skill rating from 0-7 so below are the skill ratings used if SWOS did use
a rating from 00-99 (like in the FIFA games).
First a players gets rated between 00-99 and then it gets transferred to SWOS (0-7).
Teams might seem overpowered with 4 stars (1.9M-3.5M) but players can still be
very different in skills (78-85).
It's a Euro or World Cup tournament so for replayability it also has to be a challenge. 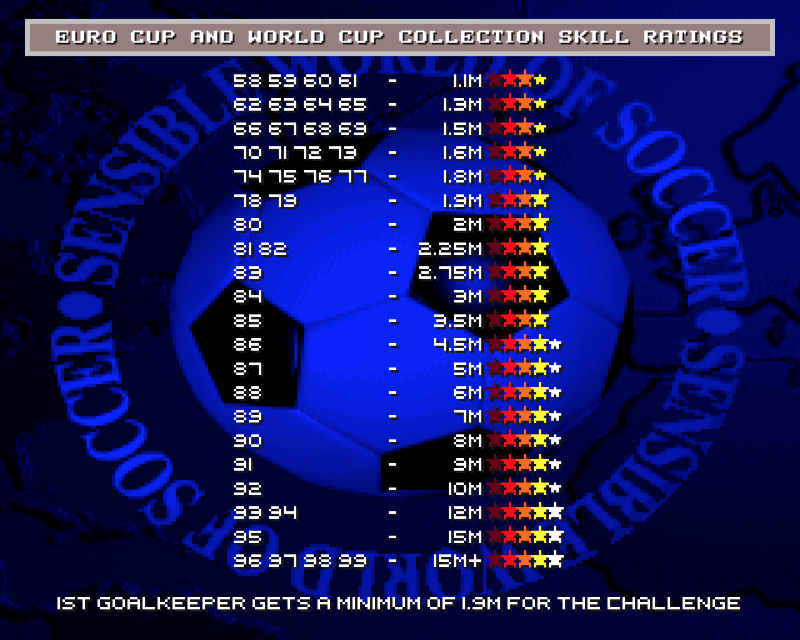 Colossal amount of work for one person. Thanks for this.

It was pure pleasure to play that on stream today! Here is the replay:

Less More
1 year 3 weeks ago #145388 by Gimp mask
Replied by Gimp mask on topic EURO CUP AND WORLD CUP COLLECTION
Why is it that the controls stop working before i play the second game every time? Not even the left mouse button works. Can you help fix this please?

We use Cookies. Dont eat too much
Ok Decline